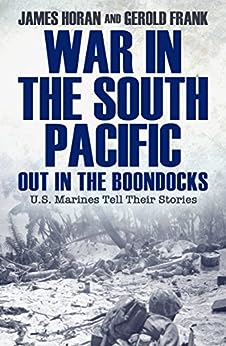 
“I was in one of the last landing barges to hit the beach of Gavutu Island. We were halfway in when the Japanese machine guns got their range. Bullets slapped the water and whined as they ricocheted off the barge. Some of us ducked; some of us fell to the floor; and all of us prayed.”

Here, in heart-stopping human detail, are twenty-one personal accounts told by the men themselves.

They are the stories of men who lived in hell and lived to tell of it.

There is the story of Sgt. Albert Schmid who was awarded the Navy Cross for his single-handed destruction of a flanking attack while on Guadalcanal.

The account of Private Nicolli who was literally blown into the air like a matchstick and then, with a piece of shrapnel in his chest, managed to help a wounded comrade to the rear.

“The luckiest man in the Solomons,” Sgt. Koziar, tells of how he had his tonsils removed with the assistance of a Japanese sniper’s bullet.

These are just three of the twenty-one fascinating stories that were told to Gerold Frank and James Horan just months after these marines had returned from active duty to recover from the conflict in the Pacific.

The valor of these marines is astounding, as twenty-one-year-old Corporal Conroy states in the book, “I don’t suppose I shall ever be able to sum up all the bravery, the guts, the genuine, honest courage displayed by the boys out in Guadalcanal. They were afraid, and yet they took it. They had what it takes . . .”

The battles of Gavutu-Tanambogo, Tulagi, Tenaru, Matanikau and Guadalcanal are all covered through these accounts which take the reader right to the epicenter of the Pacific conflict.

“telling of living conditions on the beaches and in the jungles where they fought, offering an insider’s view of foxholes, food, snipers, mosquitos, boondocks, shrapnel, their injuries, and their pain.” Great Stories of World War II

Gerold Frank and James Horan were professional authors who wrote down the stories of these marines shortly after they had returned from active duty. The War in the South Pacific was first published in 1943 as Out in the Boondocks. Frank went on to become a prominent ghostwriter and passed away in 1998. Horan, author of more than forty books, died in 1981.