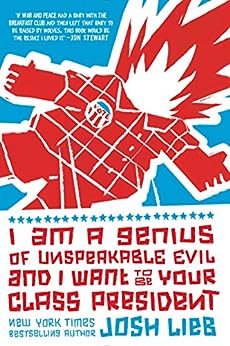 Title: I Am a Genius of Unspeakable Evil and I Want to Be Your Class President
Author: Josh Lieb

Twelve-year-old Oliver Watson’s got the IQ of a grilled cheese sandwich. Or so everyone in Omaha thinks. In reality, Oliver’s a mad evil genius on his way to world domination, and he’s used his great brain to make himself the third-richest person on earth! Then Oliver’s father—and archnemesis—makes a crack about the upcoming middle school election, and Oliver takes it as a personal challenge. He’ll run, and he’ll win! Turns out, though, that overthrowing foreign dictators is actually way easier than getting kids to like you. . . Can this evil genius win the class presidency and keep his true identity a secret, all in time to impress his dad?